JTA — A detailed account of one of the earliest American diplomatic voyages to pre-state Palestine has surfaced as part of an upcoming auction in Jerusalem.

The account appears in a handwritten letter from one of the passengers of the USS Delaware, a US Navy ship that visited the Mediterranean Sea in 1834 and made a stop at the port town of Jaffa, then under the rule of the Ottoman Empire.

Sent from the Spanish island of Menorca and addressed to Circleville, Ohio, the four-page letter describes several historically significant moments in the sailing ship’s journey, including a stop in pre-state Palestine and a visit with the first American diplomat stationed in the region.

According to Kedem Auction House, the letter’s existence was entirely unknown to scholars who study the history of the Holy Land and US diplomacy in Palestine. The anonymous collector who spotted the letter and realized its importance usually focuses on the history of the Israeli postal service. That person bought the item from another collector who had been holding it as an artifact of relevance for US maritime and postal history. 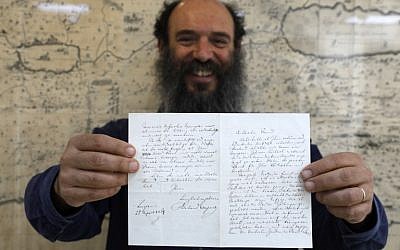 “This letter is of great importance to both the history of American Jewry as well as to the history of the State of Israel,” Kedem Auction House CEO Meron Eren said in a statement. “It’s amazing to read, if only to learn about relations between the United States and Palestine at the time.”

The passenger who authored the letter, Lewis Woofley, describes traversing much of the Mediterranean on an eastbound route along the coasts of France, Italy and Greece with stops at various islands. Eventually, the sailing ship reached the port of Alexandria in Egypt. Well-versed in the geography of antiquity, Woofley is thrilled at the sight of various ruins, noting locations mentioned in ancient folklore.

An extended stop in Egypt allowed Woofley and other passengers of the USS Delaware to venture inland where they had an encounter with the local ruler, Mohammad Ali. Known today as the founder of Egypt, Ali was busy fashioning a modern nation out of the ancient kingdom when this audience of Western visitors arrived.

“We rowed once [sic] the bay to his palace, where we were received by him seated on his divan in one corner of the room,” Woofley wrote. “He did not rise to meet us, but kept his crossed-legged position reclining his head and motioning us to be seated. Coffee was handed us in fine china goblets resting on golden stands.” 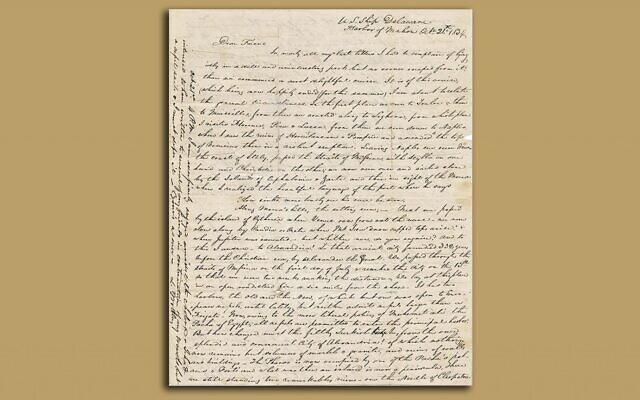 The first page of a newly discovered letter written by a passenger of the USS Delaware in 1834 (Courtesy of Kedem Auction House, Jerusalem via JTA)

During the conversation, the “good-natured” Pasha, as Woofley refers to him, displayed a charisma that apparently won over his visitors.

“The Pasha is one of the most interesting men, in many respects, of the age,” Woofley writes. “The changes that he has introduced among his subjects, the improvements that he has made and is still carrying on in Egypt are immense.”

From Egypt, the ship sailed northeast along the coast until reaching the shores of the Holy Land. This is how excited Woofley was on the morning of arrival, according to the letter: “The Holy Land! Palestine! The feelings, the reflections, the ecstasies, you may more readily imagine than I describe.”

An American diplomat stationed in Palestine, David Darmon, boarded the ship and briefed the visitors on what conditions to expect when they disembark. Darmon was a French Jew who served as a consular agent, the first American representative in the area. Little is known about him, which makes the discovery of the letter significant. 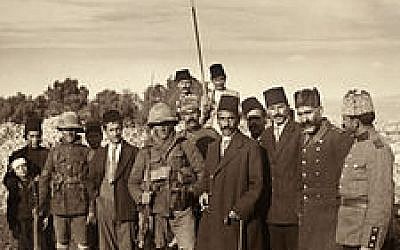 The Ottoman surrender of Jerusalem in 1917. (Public domain)

Woofley was excited to make a pilgrimage to Jerusalem, but Darmon delivered some news that seemed to quash that possibility. Palestine was in an “unsettled state.” Darmon shared news of bad roads, bandits, and a dangerous plague gripping the area.

“What a pity!” Woofley writes. “After having come so far and being so near to it — Like Moses, we are only to be permitted to see the Promised Land but not to enter it.”

Kedem Auction House expects the letter to fetch a price of between $2,000 and $4,000, with the proceeds going to an anonymous seller.


I’m proud to work at The Times of Israel

I’ll tell you the truth: Life here in Israel isn’t always easy. But it’s full of beauty and meaning.

I’m proud to work at The Times of Israel alongside colleagues who pour their hearts into their work day in, day out, to capture the complexity of this extraordinary place.

I believe our reporting sets an important tone of honesty and decency that’s essential to understand what’s really happening in Israel. It takes a lot of time, commitment and hard work from our team to get this right.

Your support, through membership in The Times of Israel Community, enables us to continue our work. Would you join our Community today?


Join the Times of Israel Community

Already a member? Sign in to stop seeing this


You’re serious. We appreciate that!


We’re really pleased that you’ve read X Times of Israel articles in the past month.

That’s why we come to work every day – to provide discerning readers like you with must-read coverage of Israel and the Jewish world.

So now we have a request. Unlike other news outlets, we haven’t put up a paywall. But as the journalism we do is costly, we invite readers for whom The Times of Israel has become important to help support our work by joining The Times of Israel Community.

For as little as $6 a month you can help support our quality journalism while enjoying The Times of Israel AD-FREE, as well as accessing exclusive content available only to Times of Israel Community members.

Already a member? Sign in to stop seeing this

Reviewed By Adam Jacob This Is Article About 186-year-old account of US diplomatic visit to Holy Land surfaces at auction was posted on Saturday, May 8th, 2021 have 5 stars rating.