The Twin Pairs are the main roads east and west

To try to lessen the lanes in Vero’s Twin Pairs and make parking along those roadways just seems like one of the dumbest ideas ever. Since that is the main road east and west it just doesn’t make sense. To have people stopping and parking along there, waiting for traffic, and holding up traffic while they get in and out of a parking spot seems like a real mess.

Please, city council members, the Twin Pairs were created many years ago and for good reason. To go backward on that would be a huge and needless mistake. Makes no sense. Please don’t pursue this further.

How about focusing on the Three Corners?

Converting Twin Pairs for parking is a bad idea

As the owner of property on the Twin Pairs (800 20th Place) I would like to state the obvious: If it works don’t try to fix it.

The traffic flow of the Twin Pairs was designed to have the least negative effect on the contiguous properties while allowing the ever -growing traffic on State Road 60 to be distributed evenly.

The prospect of having parking in this area is frightening. Imagine the delays caused by drivers pulling in and out of parking spaces. A comparison with 14th Avenue is appropriate.

Because you have the power to do something does not mean you should. This proposal of converting the Twin Pairs to allow parking is a very bad idea.

State Road 60 (formerly Osceola Boulevard) is also known as the Twin Pairs in the city of Vero Beach. This view is looking east from 20th Avenue in 2014. (Photo: ERIC HASERT/TCPALM)

“Pardon our progress” is a favorite saying of my husband, Michael, from the textile giant Milliken, where he worked as an engineer. This is the situation at Shepard Park’s current parking renovation by Ferreira Construction Company. Its end result will be a city asset, but the process can be a struggle.

Michael and I have walked the wonderful historic Stuart downtown boardwalk most early mornings for the past 18 years we have lived in what we like to call “Sailfish City.” We meet staff who park at Shepard Park on their way to Gilbert’s Coffee Shop (offering gourmet coffee and pastries at discount to Sunset Bay Marina staff and boaters, veterans, and teachers) located at Sunset Bay Marina, where parking is limited.

This city park has been a favorite for children, especially since the canopied playground and restrooms were renovated. Walkers enjoy the well-maintained boardwalk and catwalk out to the St. Lucie River.

The last project was Florida-friendly landscaping along the new seawall using native plants to eliminate need for fertilizer and pesticides near the water. The appropriately named “Protecting our Waterfront” sets an example to all waterfront property owners.

This final Shepard Park project will also be a blessing to the many boaters utilizing the only city-owned boat ramp. It will soon offer a circular drive for the trailered boats. Ferreira engineers told us recently that they are ahead of schedule.

So, yes, “Pardon our Progress,” during this final renovation which will put the bow on Shepard Park so it can truly be a shepherd to its patrons in this “Sailfish City.”

The May 21 “Your Turn” column by a liberal journalist gave a forum to a Black woman who supports critical race theory, and he essentially lumped together those opposed as “white parents.” James Briggs was writing about a school board meeting in the Carmel Clay school district in Indiana, and he also mentioned the discomfort of those parents, probably due to concern they would be labeled racist. Donald Trump, Tucker Carlson and Fox News were tossed in also. Nice touch.

To me it’s important to know what is the purpose of a pricey public-school system and whether it is preparing children for a very complex, demanding future.

My grandson enrolled his little boys in a private school. They are studying mathematics, learning about the planets, engaging in science experiments and learning about the environment on the school grounds and through field trips.

My grandson’s nephew is racially mixed and is a dead ringer for his Dominican/Mayan father. For some reason the boys don’t seem to notice. When their cousin comes to visit there are hugs all around. Their mutual great-grandfather was an immigrant from Norway. Although the Vikings were tough customers, to the best of my knowledge they weren’t involved in slavery. Doesn’t matter — great-grandfather was white, whatever that means.

If the boys were in public schools they might be learning that their cousin is a victim of white racism and they are racists by virtue of genetics. The division in this country have reached a chasm. Do we really need this now? Teach our history with honesty and balance, just don’t allow the political hacks to do it for us. 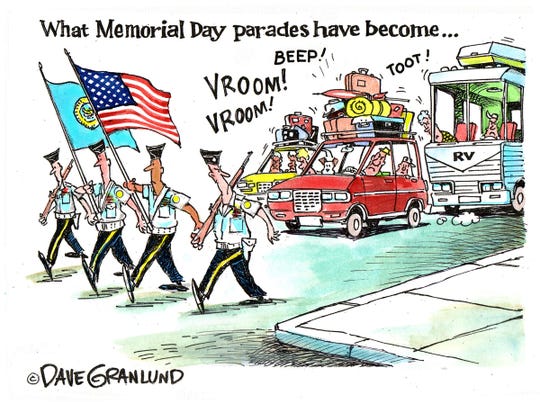 Just a note: There are two MLB teams in Florida

I’d like to remind the sports department that there are two baseball teams in Florida and it would be nice to have some coverage of them.

Three students in the WKU English Department were awarded the Benjamin A. Gilman…

Walking into the former Spoonriver space, I’d almost forgotten what it loo…

Flying is Back and So Are Biscoffs, the Little Cookies That Launch Obsessions

Honor Sachs, a professor of early American history in Colorado, was disturbed to…