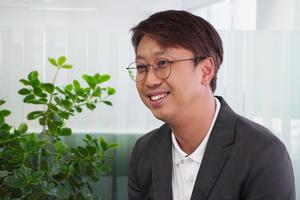 b;eat box “Pangyo techno store” is as small as 53?(about 16 pyeong) and is located at the center of Pangyo techno valley, Seongnam-si, Gyeonggi-go which is also called the Korean version of Silicon Valley and an IT hub in South Korea. The commercial area, packed with South Korea’s major IT companies, is assessed as an optimal test bed for reaching the goal of launching the 100th store this year as there is constant demand for digital retail from young workers.

I sat down with Sung won Ji, CEO of Beat corporation at the b;eat box “Pangyo techno store” to listen to what he has to say about b;eat box, a coffee shop with a robotic barista.

CEO Sung won Ji: Danal Group’s subsidiary, Beat corporation is adding value through introducing autonomous platforms in the food and beverage market. When I was CEO of Dalkomm coffee, I created a task force for app ordering system in order to introduce a platform to brick and mortar stores. This idea led me to today’s development of “Beat 3X,” the third generation model.

Q2. How he launched this project

CEO Sung won Ji: I saw robot arms moving smoothly at global exhibitions such as MWC or CESI and thought that robots could replace human baristas. Also, if customers can place an order on smartphone app in advance and pick up the order at the store, it is going to drastically decrease their time. That is why I introduce this app and these elements were in my mind when I designed a fully-automated autonomous coffee shop.

CEO Sung won Ji: I decided to take on a challenge in the B2C market when I found out that no customer is having difficulty after introducing the first and second generation models to companies and apartment complexes. If previous models automated the counter and workspace of cafe, the third generation, “Beat 3X” is space as a cafe in its own right.

The LiDAR technology applied to b;eat box | photo by – Aving news
b;eat box controls the store in a stable manner even without a presence of human workers. The AI technology makes predictions about demand and revenue on its own through deep learning and it automatically places an order of items after figuring out how much is left in the inventory. The LiDAR technology which functions as the eyes of a self-driving car has been introduced for the first time in the automated coffee shop industry. After collecting various operation and marketing data in the store, it provides best store operation solutions according to commercial areas. Beat corporation is planning to advance its O4O(Online for Offline) business through getting marketing insights by analyzing data collected online and applying them to the operation of brick and mortar stores.

CEO Sung won Ji: There are two ways in which customers can buy a cup of coffee: order online and pick-up in store or just vising the store. If customers use an app and place an order in advance, they will be informed of the pick-up code and how much time it takes from checkout to when the order is ready for pickup. They can pick the order up at the store later. This way, safety is ensured in the Covid-19 era and it can drastically reduce customers’ time. Customers can also place an order through a kiosk in the store which will provide a pick-up code just like an app through which they can get their beverage of choice.

Q5. About the design of Beat 3X

CEO Sung won Ji: The design of first generation model is rough compared to today’s models. At the time, we targeted the B2B market and focused on functional elements. We believed that cold design is not attractive so we introduced robot’s face on screen from the second generation. And today’s third generation has evolved into a customer-friendly model which not only has 24 different types of facial expressions but is also able to communicate with customers who visit the store for pick-up.

Q7. Why “Beat 3X” was unveiled in Pangyo

Pangyo techno valley is a hub in which all IT-related infrastructure is located. It is where young people with innovative ideas work so I thought a coffee shop with a robotic barista which is new to most people will be well-received from employee at companies in Pangyo. And I thought it was the best place to gain popularity among busy customers.

Q8. The effects of Covid-19 pandemic

I came up with an idea of an autonomous coffee shop from 2016. In actuality, the first and second generation models are already being used pre-pandemic. Due to the Covid-19 pandemic, “contactless” has become an important term and businesses have been able to grow more rapidly. The same goes for the global market which is why Beat corporation is striving to expand across the globe.

Moreover, Beat corporation has been recognized for its innovative business model and future growth potential which helped the company attract series A investments worth 10 billion won from four institutions in the first quarter. Beat corporation is taking root as a leader in the industry through commercializing the world’s first coffee shop with a robotic barista with more than 100 stores.

Sung won Ji, CEO of Beat corporation is from Seoul and was born in 1979. He majored in computer science in Kyung Hee University, Seoul. As an engineer, he joined the entertainment department of Danal in 2006. And after being recognized for his accomplishments from launching of Dalcom coffee to expanding the franchise business at home and abroad, he was promoted to CEO of Danal (today’ Danal F&B) in 2016. CEO Sung won Ji who planned to launch a coffee shop with a robotic barista for the first time when he was working at Dalcom took on a role of b;eat box development and business management from 2017 when a related task force was created. In October last year, he was promoted to CEO of Beat corporation separated from Dalcom and successfully carried out high-profile projects such as “launching the 100th store” and “attracting series A investments worth 10 billion won.”

Beat corporation is adding value through introducing autonomous platforms in the food and beverage market. When I was CEO of Dalkomm coffee, I created a task force for app ordering system in order to introduce a platform to brick and mortar stores. This idea led me to today’s development of “Beat 3X,” the third generation model.

About "[Pangyo Technology] b;eat box of Beat corporation, South Korea’s first coffee shop with a robotic barista, is becoming widely available … Its goal this year is to launch 100th store"

Reviewed By Adam Jacob This Is Article About [Pangyo Technology] b;eat box of Beat corporation, South Korea’s first coffee shop with a robotic barista, is becoming widely available … Its goal this year is to launch 100th store was posted on Monday, June 14th, 2021 have 5 stars rating.

Big Joe Shares Two Easy Ways to Get the Most Flavor from Pour Over Coffee. Tired…

How Many Episodes Of Friends Did James Michael Tyler Star In?

While many of his appearances were not-particularly memorable cameos, James Mich…

Starbucks Baristas Are Getting Raises and a Higher Minimum Wage

Starbucks is raising wages for baristas and increasing the minimum wage. Starbuc…