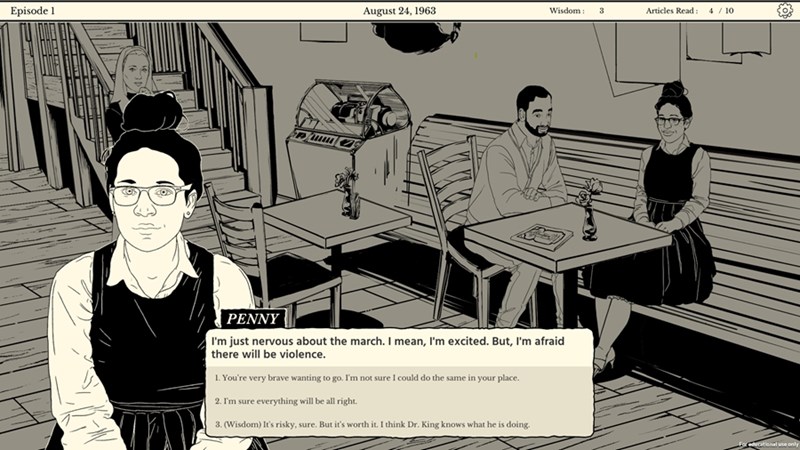 Still image from the Tesseract Center’s award-winning game, Mornin’ In Your Eyes.

The Tesseract Center for Immersive Environments and Game Design at the U of A won Silver in the Higher Education category for their entry in the 2021 International Serious Play Awards competition, which honors outstanding games used for training or education.

The competition is part of the annual Serious Play Conference, “a leadership conference for professionals who are exploring the use of game-based learning, sharing their experience and working together to shape the future of training and education.”

The Tesseract Center’s entry, Mornin’ In Your Eyes, is an interactive visual narrative that immerses players in key events of the U.S. Civil Rights Movement from 1963-64. Other award winners include major for-profit game studios like Schell Games, as well as additional top-tier education institutions including the Harvard Business School.

Mornin’ In Your Eyes was developed by the Tesseract Center in conjunction with professor Jeannie Whayne of the Department of History in the Fulbright College of Arts and Sciences, with the support of a Teaching Improvement Grant from the U of A’s Wally Cordes Teaching Faculty and Support Center. Additional support for the development of Mornin’ In Your Eyes was provided by U of A’s Global Campus.

Along with Whayne and the Tesseract Center staff, the game’s development team included Ken Muessig, instructional designer for the U of A Global Campus, and Priscilla and Kevin Snow of Bravemule, an indie game-design team, for music and scripting. Will Teague, a Ph.D. student in the Department of History, provided research and design input.

Mornin’ In Your Eyes has been used as a learning tool in the U of A’s U.S. history and Arkansas history courses since 2019. The game is set in a fictional coffee shop in a college town in the early 1960s and incorporates contemporary newspaper articles from The New York Times and The Chicago Defender.

Players read articles and engage in conversations with the coffee shop’s diverse cast of characters — each with a different perspective on the struggle for political, social and economic equality for Black Americans.

Players learn about this period’s transformative events, including the March on Washington, the assassination of John F. Kennedy and the passage of the Civil Rights Act of 1964.

“The game is such a fantastic way for players to practice historical empathy,” said David Fredrick, director of the Tesseract Center and professor in the Department of World Languages, Literatures and Cultures. “It’s another skill players can gain as they try to understand the points of view of each of the different characters, as well as come to terms with the fact that many of the issues of racial inequality and injustice from the game’s time period remain with us now — nearly 60 years after the events in the game.”

About the Serious Play Conference: Serious Play is an annual conference that focuses on game-based learning and education. It includes multiple tracks with presentations by experts across the range of game-based learning, including K-12 and higher education, healthcare, worker training, executive education, and the military. The International Serious Play Award Program highlights achievements in serious and educational games across these verticals, with judges drawn from professional game studios and academics whose research lies in the serious use of games.

About the University of Arkansas: As Arkansas’ flagship institution, the U of A provides an internationally competitive education in more than 200 academic programs. Founded in 1871, the U of A contributes more than $2.2 billion to Arkansas’ economy through the teaching of new knowledge and skills, entrepreneurship and job development, discovery through research and creative activity while also providing training for professional disciplines. The Carnegie Foundation classifies the U of A among the top 3% of U.S. colleges and universities with the highest level of research activity. U.S. News & World Report ranks the U of A among the top public universities in the nation. See how the U of A works to build a better world at Arkansas Research News.

Arts and entertainment May 24, 2021 During this time of uncertainty and isolatio…

The Centre Pompidou Plans an Outpost in Jersey City, and Other News – SURFACE

DESIGN DISPATCH Our daily look at the world through the lens of design. BY THE E…